Eating with chopsticks is a tradition that had already developed in China 3500 years ago. Buddhist monks later brought this method of eating to Japan and Korea. Knives, however, are not part of a Chinese table setting; they are associated with violence according to Confucian teachings and thus have no place in a hospitable environment. Thus, meat and vegetables are already cut up in the kitchen into bite-sized portions that can be brought from the plate to the mouth with chopsticks. If dumplings or pieces of meat are too large for the mouth, one can simply hold the piece with the chopsticks and take several bites.

When rice is served separately in a small bowl, one brings this bowl to the mouth with the free hand and shovels the rice into the mouth using the chopsticks. One should also practice eating rice dishes from a flat plate.

Eating with chopsticks - the basics

Before taking a look at the following photos, pick up a pen in the hand as usual - that is, between the forefinger and thumb - and move the pen on a piece of paper from top right to bottom left and back by moving only the fingers. Sketch out several lines from top to bottom and back.

Now take a chopstick made of bamboo, the ribbed surface of which is ideal for practicing. With the smaller end pointing away from you, grip the bamboo chopstick loosely as shown in the photo so that the chopstick cannot move while your thumb and index finger are still able to move. You will end up holding the two chopsticks so that one remains in a fixed position in the hand while the other one will be movable... 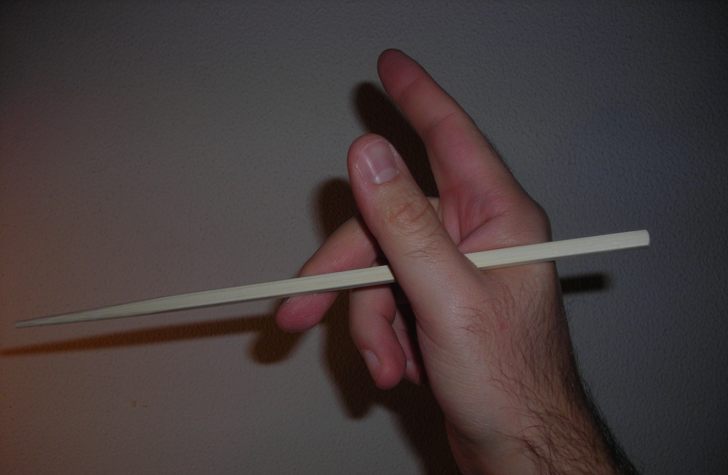 Do you remember the practice session with the pen? Grasp the second chopstick like a pen now! 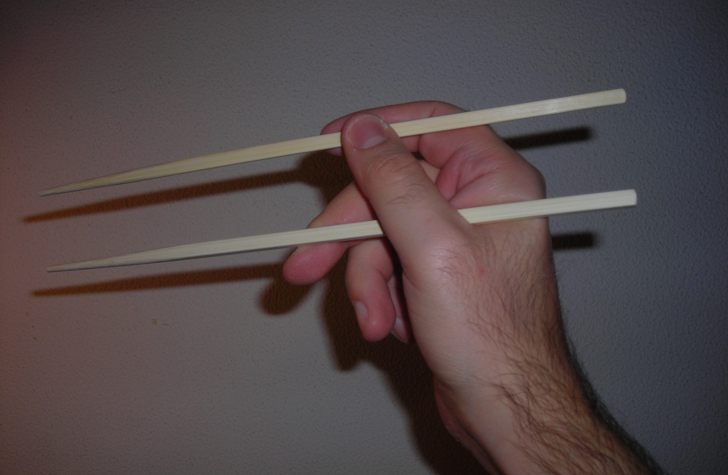 Now, move the "pen" chopstick back and forth toward the fixed chopstick as if you were using it to write on a piece of paper. 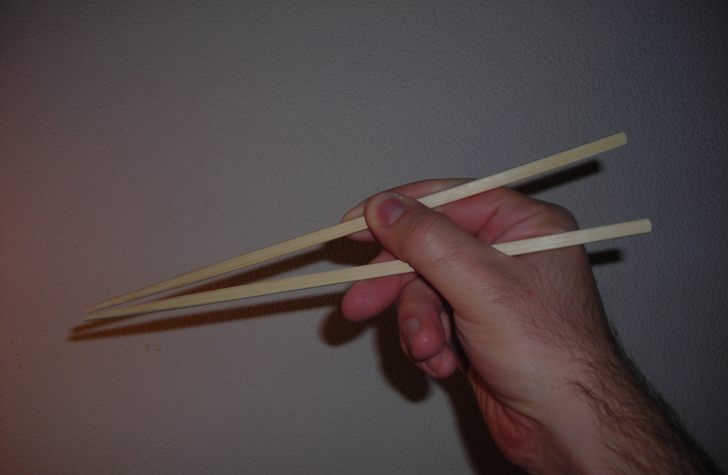 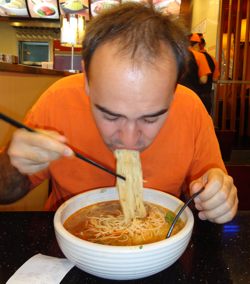 When you can bring the ends of the two chopsticks together to touch consistently, without crossing them, then you are ready to practice with real food. As one more reminder, only the chopstick between the thumb and index finger should be moved.

The arrangement in the last picture is the most comfortable, and is the basic position. Now, if you want to take a big mouthful of meat, use the more parallel position from the second picture, and grab the piece of meat between the chopsticks so that it is easy to grip it and bring it to the mouth. You must never use the chopsticks to stab the food!

At the beginning, it is better to use the chopsticks for soft foods; harder vegetables can be tried later on. At a more advanced stage, you can also practice with individual peas and peanuts. As you become adept, you can switch from the bamboo chopstick to the version made from plastic, which is a bit more slippery.

For practice, use them to eat spaghetti. Take up a number of spaghetti strands at the same time using the chopsticks, and bring these to the mouth. As soon as you have the spaghetti strands between your lips, loosen your hold and move the chopsticks down about 5 cm, then re-grip to help guide them in. By practicing in this way, you’ll be able to eat noodle soups like a pro! You needn’t go overboard as in the picture to the right! The Chinese spoon can be used to help in this case..

Don’t poke around in the food with your chopsticks to pick out the best portions. When eating in company, take portions of the various dishes offered from the top middle using your own chopsticks. Infrequently, separate chopsticks or a spoon will be provided in the dishes served, which are used to serve portions onto one’s own plate. If a host wishes to offer you an especially good piece of meat, this will be placed on your plate – food is never passed from one set of chopsticks to another! You should eat this offered portion as a sign of friendship and respect. If you don’t want to eat the food, simply leave it on your plate. Once you are full, be sure to comment that too much food has been served.

Do not play with the chopsticks. Do not use a chopstick or your finger to point at anyone. Do not strike your chopsticks against a bowl; this is offensive because it is what beggars do.

Do not stick your chopsticks upright in the rice bowl and leave them there! This too closely resembles the use of incense sticks that are burned in mourning rituals. If you want to take a break or have had your fill, lay your chopsticks down on the table on the same side of the plate as the hand you used to hold them, with the ends that have contacted your mouth resting on your plate, or on a holder if present, as shown in the picture to the right. The chopstick ends should be pointing away from you, and should not be crossed. Never lay the chopsticks entirely on your plate, even at the end of the meal!