Holding onto traditions, under the influence of Taoism and Buddhism

Chinese culture and social behavior have evolved for millennia independently from the rest of the world, with some remarkable features that are mentioned here briefly. Chinese paintings and handicrafts appear quite interesting to Western eyes, but tourists in daily contact with the Shanghainese and especially with the restaurant behavior might expect some unusual and charming practices, for which one should be prepared.

In contrast to Western art, which has seen a rapid series of essential stages of development in painting, Chinese art frequently references the style of works from the past, since the value of tradition is highly prized in Chinese society in general. This shows respect for the masters, which is a key part of Confucian philosophy. 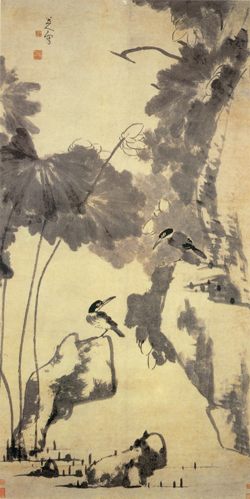 The theory of yin and yang - that of opposing principles that compete and influence one another, aids the alternation between the painted and unpainted surfaces in Chinese painting, but is also pertinent to the interplay between soft and hard in the culinary arts. Taoism, a religion that promotes living in harmony with nature, has also strongly influenced Chinese art and culture. Thus, the pictures and engravings of natural landscapes and animals, which alternate between rich detail and virtually unpainted surfaces, can primarily be attributed to these fundamental Chinese philosophical concepts. On the other hand, the later introduction of Buddhism means that it has had limited influence on art and culture, despite the fact that 102 million Chinese have now adopted this religion.

The picture to the right - "Lotus and Bird", by the painter Zhu Da - comes from the 17th century. The original hangs in the Shanghai Museum, which is located in People's Square.

Communism as a state doctrine

The new doctrine of communism was introduced into China at the beginning of the 20th Century, culminating in 1966-1976 Mao Zedong's Cultural Revolution, in which the country’s traditions, religions, and Confucian philosophy were all called into question. The Cultural Revolution claimed a great many victims, but was fortunately only moderately successful. As a result, though, the original, traditional values and religious customs that persisted in the cultures of Hong Kong, Taiwan and the Chinese diaspora overseas have lost their importance in China’s heartland. In Shanghai, one sees a definite return to Buddhism as a religion. Buddhist temples and statues are being restored and refurbished, and a visit to at least one of the numerous Buddhist temples in Shanghai is highly recommended.

This begs the question of how quickly this rediscovered Chinese culture will give way to a globalized lifestyle. Shanghai is currently developing into a melting pot of different cultures, so that for now the most diverse lifestyles and traditions coexist within narrow confines. The architecture itself bears witness to the great upheavals, from traditional buildings through the Communist functional construction to the Western style structures. The Western influence on consumer behavior in Shanghai is considerable. Advertisements for luxury items are becoming pervasive, and are found everywhere on the streets. Western-style fast food restaurants are also making inroads, and hundreds of food carts can be found in the streets.

"Saving face" is important to Chinese people. It is important when dealing with the Chinese to be respectful and humble, and not to put pressure on the other person or confront them. Several examples and points to remember:

• Instead of answering "yes" to a request or a question, Chinese people often simply acknowledge that they are listening.
• If, with map in hand, you approach an inhabitant for help in locating something, this person might be unable to help. However, such a situation would be embarrassing for a Chinese person. A better solution is simply to study the map carefully for awhile. Then, if there is a knowledgeable person nearby, they will approach and offer to help.
• If a problem comes up, point it out in a friendly and gentle fashion. An aggressive demeanor should absolutely be avoided.
• Political discussions can be misunderstood; in particular, do not engage in any criticism of political conditions, since this can sound preachy. In the worst case, political criticism can be taken as a criminal offense and can lead to arrest.
• It is advantageous to be familiar with Chinese culture, traditions and history when coming into contact with Chinese people, since such interest is much appreciated.
• Chinese people often ask about where one comes from, one’s age, and family situation as a way to break the ice. It is best to answer these questions respectfully, even when the questioning becomes a bit tiresome.

Chinese people laugh often, even in improbable situations. Laughing helps to defuse a tense situation, for example in a traffic accident. The Chinese believe that Westerners laugh too infrequently. However, one should avoid making ironic or sarcastic statements to a Chinese person, since this often leads to misunderstandings.

Anyone wishing to do business with a Chinese person should take care to initiate on friendly terms. An invitation to a restaurant following by a reciprocal invitation are mandatory. Gifts are quite welcome. However, it is recommended to seek advice in a Chinese store. For example, a tea service for four is not an auspicious gift, because the number four is very unlucky.