In the sub-page on Trip planning can be found tips and advice on Booking a Flight.

Transfers from Shanghai Pudong International Airport to the city

For travelers who want to get to the Shanghai city center, there are two main alternatives: A taxi costs about 200 yuan (this can double in the evening with the nighttime surcharge), the travel time is expected to be more than one hour. Much faster is the maglev train, which travels from the airport to the final stop of "Longyang Road" in eight minutes at a speed of 301 km/h (187 mph). A maglev train ticket costs 50 yuan, or 40 yuan if you show an airline ticket. Passengers can transfer at Longyang Road Station to the Metro lines 2 and 7 (see PDF map), but during rush hour (7-9 am and 4-6 pm) some trains are completely full. Taking a taxi is a better bet once in the city, especially if traveling with a lot of luggage.

Shanghai can easily be explored on foot, since most streets have sidewalks and large intersections have pedestrian crossings. Even when the pedestrian light is green, it is still recommended to look both ways since bicycles and motorcycles frequently speed through. Only cars obey the red lights. On the side streets without sidewalks, chaos reigns. One must trust that the Chinese drivers can dodge skillfully, or at least use their horns. There are large pedestrian areas at Nanjing Road and at the Bund. 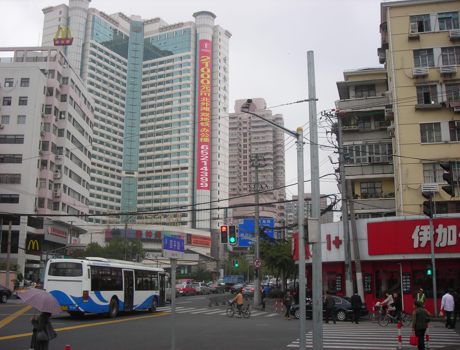 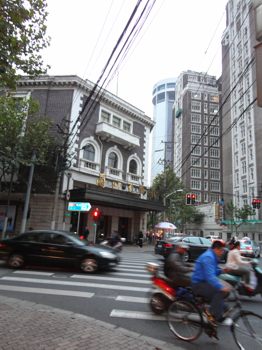 Inexperienced or nervous drivers should resist the temptation to drive around the city in a rented car. The rules of the road often appear to boil down to the bolder motorist or more powerful vehicle taking precedence. In addition, the traffic is so bad at some times that in the mornings and evenings, travel by the Shanghai Metro is much faster and safer. Incidentally, drivers and pedestrians do not need to worry not reading Chinese - street and place names on traffic signs are bilingual in Chinese and English. 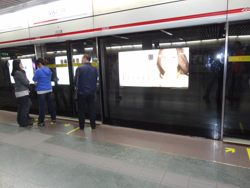 The station density of the Shanghai Metro seems high from the map (PDF), but it should be kept in mind that the city of Shanghai occupies a vast area of 1900 km2. The route of Shanghai Metro Line 4, which is the loop line and within which most of the points of interest are located, is 33 km long and includes 26 stations. With a distance of 1-2 km between stations, one can expect up to a half-hour walk to reach the closest Metro station.

The bilingual (Chinese and English) identification signs on the trains and stations is a huge advantage. Since announcements in the trains are also given in both languages, and there are station indicator lights that light up inside the train, tourists don’t need to worry about getting off at the wrong station. 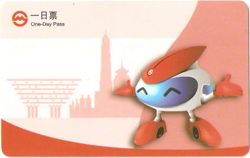 The trains run frequently, but one can seldom find a seat in the main lines, even outside rush hours. Since the stations are often very crowded, the Metro only stops in each one for about a minute. During this period one can exit through the middle of the door while people are simultaneously boarding on both sides. The boarding locations are clearly marked in the underground Metro stations so that people can already be lined up. Additional glass walls and self-opening glass doors protect the Metro users from the arriving trains.

A one-day pass for the Shanghai Metro is a bargain at 20 yuan. The plastic card with a radio chip is available at staffed ticket windows in the Metro stations so that one need not struggle with a vending machine.

The following photo shows one of the stations on Line 4, long portions of which have an elevated train design with open platforms: 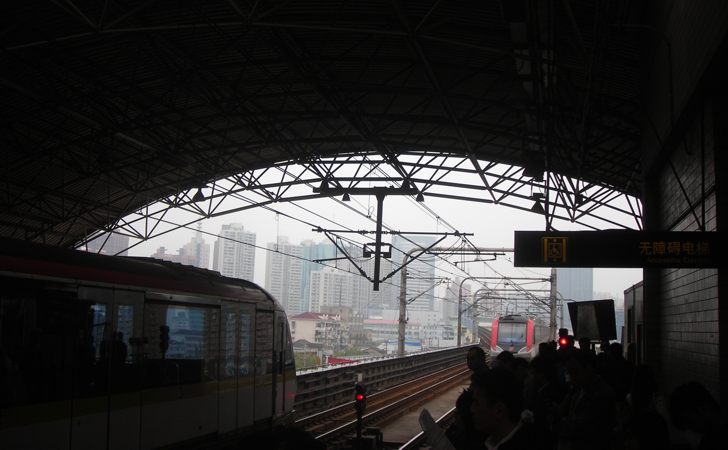