Since Shanghai is a Special Economic Zone in China, the city
has evolved into an immense industrial and financial center 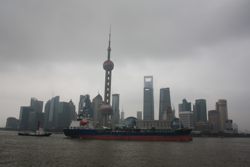 After Hong Kong, Shanghai is truly one of the most Westernized Chinese cities. It is still a charming city for tourists, since there are side streets still alive with traditional Chinese flavor, which contrast with the Jin Mao Tower and the Shanghai World Financial Center skyscrapers in Pudong, architectural wonders that stretch toward the heavens. In between the modern skyscrapers are untouched oases, such as the Jing'an Temple or the Old City of Shanghai. Dozens of visitor attractions can be found throughout the city, all easily and inexpensively reachable using the Shanghai Metro.

The city of Shanghai walks along a razor’s edge between chaos and order, between free-market capitalism and a planned economy. Thus, there are chaperones at some of the major tourist attractions to ensure that no one misbehaves, while on the other hand, one is frequently approached on the major shopping district streets, such as Nanjing Road, and asked to buy a watch or a shirt. Religion - especially Buddhism - is once again part of everyday life for some Chinese. It is obvious that they have become reacquainted with, and respect, their cultural heritage.

Another important reason to visit Shanghai is the rich cuisine. In this city of immigrants from every part of the country, over 1000 restaurants offer practically any imaginable dish from all the regional cuisines in China: everything from spicy hot Sichuan chicken to country-style noodle dishes, all ready to satisfy the adventurous diner’s palette. Most hotels offer guests an extensive breakfast buffet each morning, from dumplings, rice and noodle dishes to the more familiar Western breakfast fare items. After such a hearty breakfast, a sumptuous noodle soup with chopsticks and spoon will usually tide one over the midday until evening, and an inexpensive meal in an upscale setting. One necessity - Make sure your chopstick technique is up to par!

A tourist can get about the city and on the Metro well enough with English, and most street signs and menus are sub-titled in English. Sometimes, thought, the latter can require some imagination to decode! Especially in the financial district, the younger Chinese speak English quite well. In restaurants, there is frequently at least one server who knows English; otherwise, pointing to pictures in the menu is sufficient. Still, it is advisable to have a map of the city and the Metro, since it can be challenging to ask directions from someone on the street. Unfortunately, sometimes a point of interest might be more than a few minutes on foot from the nearest metro station… 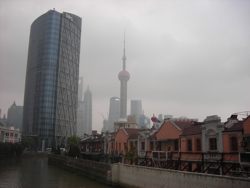 Shanghai will dispel some of the preconceptions you might have about this Chinese city and its inhabitants; still, plenty and poverty coexist so closely here that one can go from an open-air market with live chickens in a coop to an exclusive luxury hotel within a matter of minutes. Shanghai also carries so much unique fascination, one is tempted sometimes to stand back and take a break. Still, the fast pace of life there, and the incredible pace of construction with which boom-time development supplants the older, simpler residential areas - all is so impressive that in either case, one wants to visit this city often to experience the change.

Traveling to Shanghai is easy. The airlines have recognized the trend, and offer direct flights from New York City, Chicago, San Francisco and Los Angeles. Hotel accommodations and meals in Shanghai are not expensive, so that a round-trip flight with a one-week stay can be had on a budget of $1500 per person for travel in the off-season, for example in October, November, February, or March.